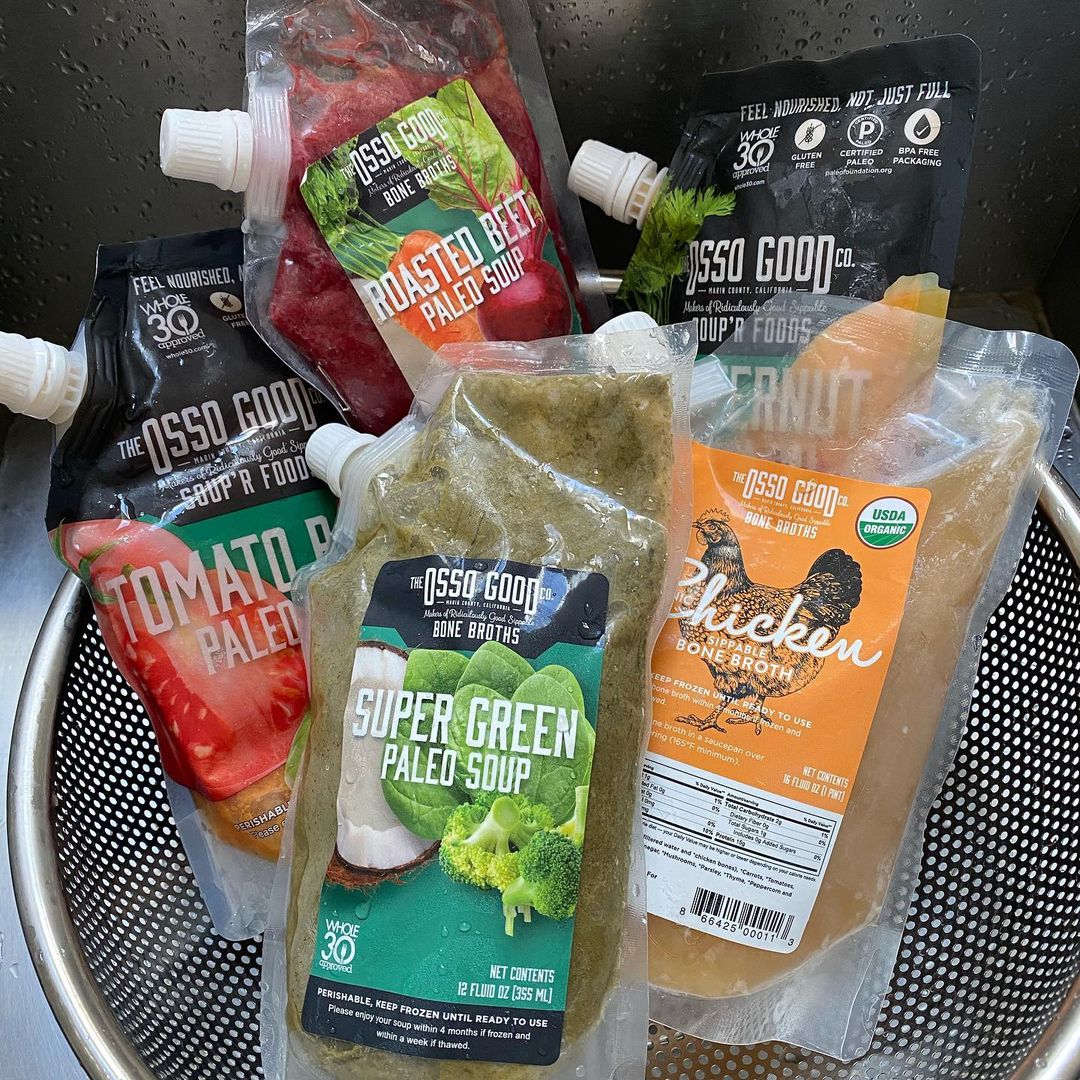 The founders of Osso Good believe food is medicine and bone broth plays a very important role in general health and well-being. The Osso Good company has been making quality, nourishing bone broth and nutrient-dense paleo soups for years. Their products are made with organic ingredients that are also gluten free. Osso Good makes its bone broth in small, controlled batches to ensure the quality is always consistent and the taste is outstanding.

The individual Osso Good broths cost about $7 each. The multi-packs are around $63 plus the cost of shipping.

With the exception of BrothMasters bone broth, Osso Good broths are a bit more expensive than other broth brands like Kettle & Fire, EPIC, and especially those brands, like Swanson, found at local grocery stores, though Osso Good is of a higher quality.

Osso Good bone broth has natural anti-inflammatory properties to reverse bodily inflammation from harmful stimuli like pathogens, alcohol, and stress. By consuming foods that are anti-inflammatory, it's possible to reverse the inflammation over time. The amount of time it takes to calm inflammation varies from person to person but many have noticed a positive shift after successful completion of Osso Good's?7-day bone broth cleanse. The cleanse is designed to re-align customers with better eating habits. The cleanse includes two pouches of bone broth per day plus instructions on what accompanying whole foods to eat. Osso Good advises eating pastured and grass-fed proteins, avocado, coconut oil, ghee, and organic vegetables. Osso Good advises against consuming dairy, grains, or added sugar while taking part in the 7-day bone broth cleanse.

Osso Good bone broth uses only the most high quality and most humane animal ingredients possible. The beef used by Osso Good is not only?pasture-raised but?also AGA certified grass fed and raised with practices that go beyond organic.?The chicken used by Osso Good is organic and pasture-raised and the chickens forage for their food outdoors. The vegetables and herbs used by Osso Good are also organic and all broths are paleo certified,?gluten free,?antibiotic free,?free of added hormones, and free of any mysterious ?atural flavors·used in other broths on the market.

Traditional foods like Osso Good bone broth are making a comeback. Long ago, ancient cultures used empty abdominal pouches from slaughtered animals to cook meat, bones, vegetables, herbs, and water with hot stones on the fire. Bone broth has been a health remedy prescribed by medical professionals for centuries. Ancient Chinese cultures used bone broth to nourish the kidneys and bone broths and soups were often termed ?ewish Penicillin·for its ability to boost the immune system. Fast forward to the 20th century. In an effort to make more profit for shareholders, companies such as Campbell?, in the 1940's and 50's, replaced natural ingredients with artificial flavors and MSG. That's when broths became nothing more than flavored water. It's only recently become popular to regain our heritage of traditional foods and by slowly simmering bones, meat, vegetables, and herbs in water for a long period of time, a nutrient dense elixir is created that has always had its roots in healing and nourishment.

Osso Good bone broth arrives in frozen pouches. Tears to the pouches don't happen often but they can occur. When thawing the broth, it's best to place it in a bowl standing upright. Tears typically occur in bunches within the same order, most likely due to the way it's been handled while in transit. If the package is mishandled, frozen pouches bang into each other, which can cause some tears.

Since Osso Good bone broths and soups are made with such high quality, organic ingredients, the price tag is quite a bit higher than what is available in grocery stores. With the additional shipping cost, it can get a bit pricey

Osso Good does not add salt to the bone broths in order to keep them medicinal in nature. The soups also feature minimal sea salt so customers should be aware not to expect the saltiness that accompanies other bone broths and soups.

Since bone broth is made from animal products, it is obviously not an option for vegetarians and vegans. Though Osso Good offers plant based soup and broth selections (including vegetable broth, mushroom broth, vegan organic tomato basil soup, organic super vegan soup, and organic Thai coconut soup) the major health benefits of broth come from the meat.

There is no specified target demographic for Osso Good bone broths and soups. Though, due to the higher price point, it is more of a luxury item.

How long does the product last?

Osso Good bone broth and paleo soup will be good for up to 75 days unopened and refrigerated. The Osso Good company has a motto that ?eal food shouldn? last real long· In other words, bone broth is highly perishable. Shelf stable bone broths are typically heated to 280? to kill off all bacteria, even good bacteria. This process can also make the protein less potent and absorbable. Quality bone broth is a superfood known for its gelatin texture and its expiration date.

Customers are offered $15 off by subscribing to their mailing list or customers may use promo code LOVEYOURGUT for $15 off when ordering at any time. Additionally, shipping is free on orders over $50.

Osso Good bone broths and soups would make a great gift for anyone who would benefit from a high-quality, nutrient-rich, broth that is both tasty and good for you. But be sure the gift recipient is a person who is not vegetarian or vegan.

Customers can reach an Osso Good representative by emailing [email protected] Customers will receive a thorough response withing 24 hours from a helpful representative.

When shipped, Osso Good broth arrives in a box of frozen, sealed pouches.

Osso Good offers free shipping to certain states on orders over $50. Customers have to select their state from a dropdown menu to find out if that state is eligible. Osso Good receives orders all week and makes fresh broth to fill those orders. The orders are then shipped out frozen the following Monday and Tuesday so there there may be a delay between ordering and shipping depending on the day the order was placed.